I’m currently home sick from work; And I’m not coping at all. 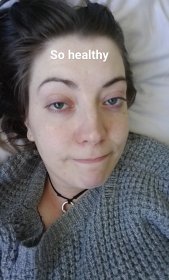 For anyone who knows me, they know I really don’t like being sick. In fact, the term “Man flu” applies to me harder than it applies to any man on Earth. I get sooky, needy, and annoying. I also get really bored. Like, REALLY bored. I am not someone who can sit still and do nothing. “Rest” is not really a concept I’m familiar with.

In my boredom I’ve spent most of today watching back to back makeup tutorials. I love makeup, I love learning about it, and I love learning new techniques for products I can never afford to wear. #debtlife Also, American prices for the same products are just insane compared to Australia. eg: $7.99 US for Maybelline Fit compared to $19.95 AU for the same foundation – and the $19.95 is usually the ON SALE price. Don’t even get me started on the specialty brands like Anastasia Beverly Hills etc. that we can only get in certain states of the country due to brand ownership within stores that are only in certain major cities… *deep breath* Thankfully, I live in one of those major cities; But the prices are RIDICULOUS.

Thanks to the barrage of videos I watched, I realised that I own a LOT of makeup that is out of date or from when I use to fake tan regularly (which means it’s very much the wrong colour and very, very, VERY old). I threw a lot of old makeup out when I moved house a few months ago, but there were a few things I held on to for… Well, for no reason at all other than I’m super cheap. So here is a photo series of me using 8 products I don’t know why I still have/how I got them in the first place. 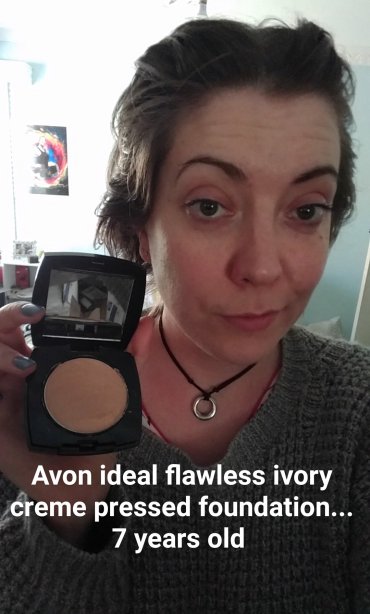 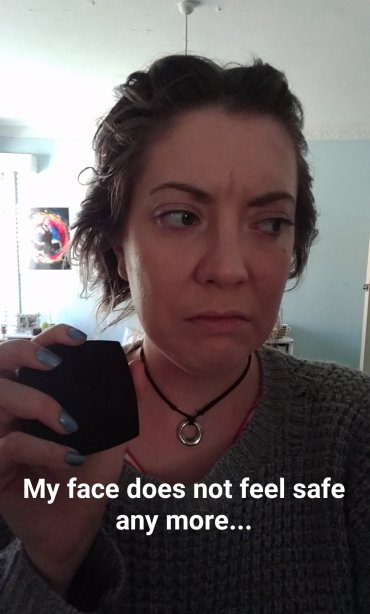 The first product I found was an Avon creme pressed foundation that was at least 7 years old. I always tried to save it for when I was tanned and going out for drinks and wanted an easy coverage. I even used the sponge applicator than came with it. After I smeared it all over my face I realised that I really should have prepped my skin with moisturiser and/or primer. It started to feel a little… burny. Maybe that’s because it’s so old, maybe that’s because I’m really sick at the moment and nothing feels good. Either way, it was a shit show. 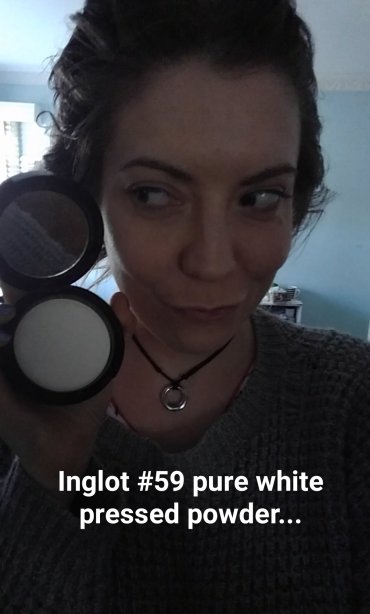 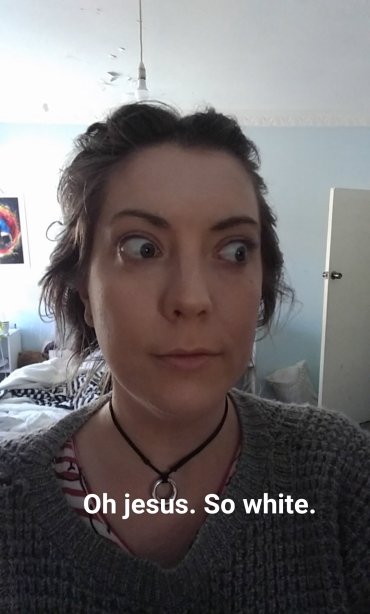 The Inglot powder I had bought a few years ago when I was determined to do a Corpse Bride thing for Halloween if I could lose weight. I ended up fatter than I had been when I’d made the decision, lost the powder and forgot it existed. I honestly have no idea if you can even still buy it. I can’t seem to find it on their website. On skin it is pale and has a slight shimmer to it. It could probably work as a nasty highlight if you want to be brave and not use a real highlighting palette. About this point I realised the lighting where I was standing was not great. 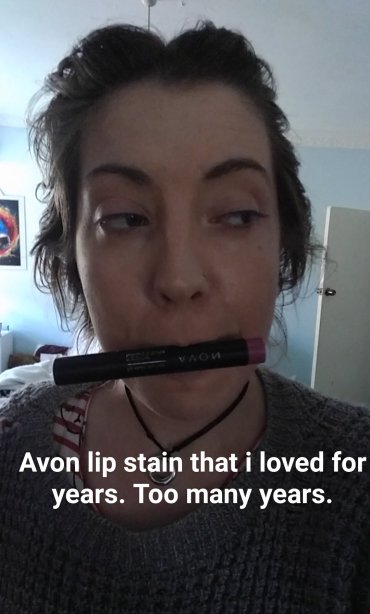 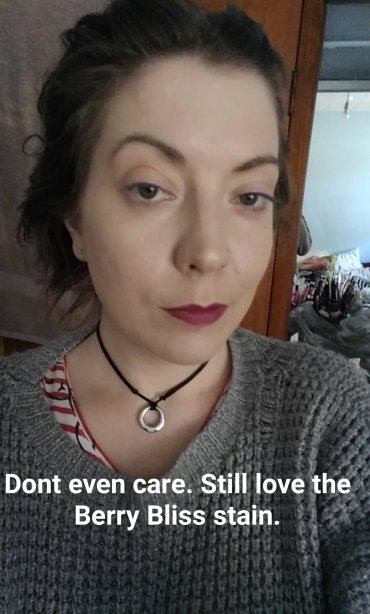 Up next was the Avon Berry Bliss Lip Stain I bought, oh, a squillion years ago. The tube has never dried out on me, and the colour is still as strong and striking as the day I bought it. I obviously went through an Avon phase quite a few years ago. I can’t really explain it, but at the time there was something magical about helping out a middle-aged lady trying to make some extra cash by coming in to my house for a cup of coffee and giving me testers of amazing coloured products. It was convenient and at the time it was relatively competitively priced for products for someone who didn’t give two shits about the beauty world. 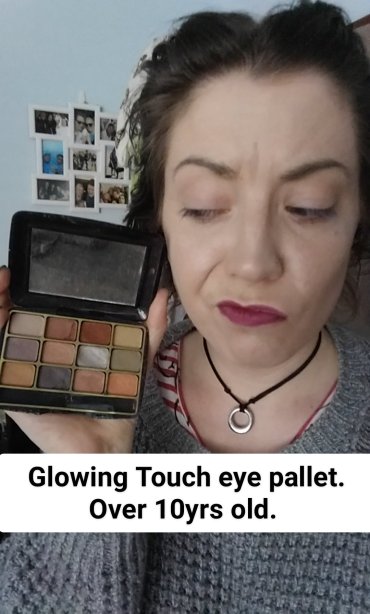 Now, this eye palette is actually older than 10 years old. I realised after I’d saved the photo that I remember seeing this palette in my mums’ makeup collection well over 15 years ago. Time means nothing. Life is a lie. I borrowed/took this from her when I went through a budding nude-look phase. I think I used it for a month or so, then went on to cheap-ass glam and left this palette by the way-side. I never had the heart to throw it out though. Whenever I do a makeup disinfect rampage, I always pull this kit out and spray it down too. Luuuuckkyyy! 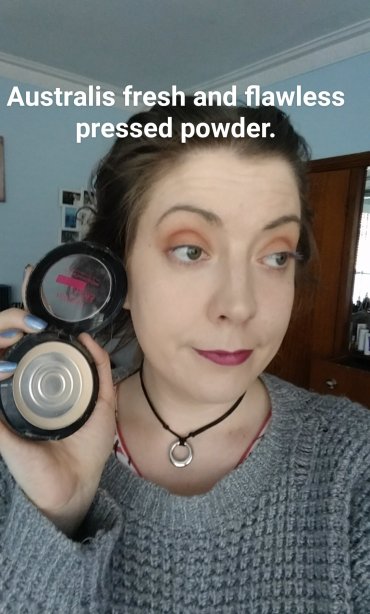 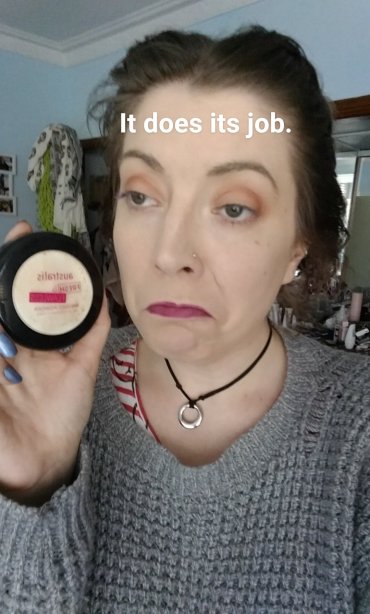 Now, I actually really like Australis products. Some of them, anyway. This one has clearly been well loved and well used. I don’t know why I stopped using it or why I held on to the dying remnants. I could have always just used it to the end and then bought more. But no. A sale probably happened and I would have been so excited to use my new-fangled whatever that this went in to the makeup bag of forgotten goodies and was left there to crumble; Alone and forgotten. It did a good job of evening out some of the seriously white patchy horror than I created with the Inglot #59. 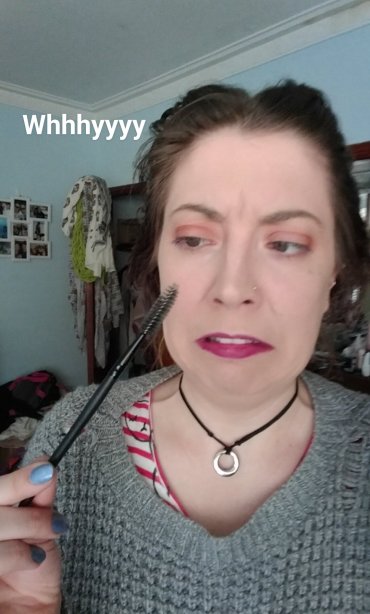 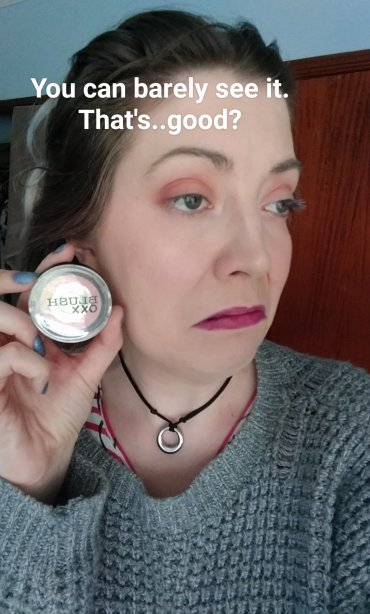 I should probably apologise for the image quality. While my phone has a fairly average to decent camera, I was using the forward facing camera through Messenger, because it allowed me to add the comments to the images. I don’t have Snapchat or any of those fancy apps, so this is what I used in my pursuit of curing my boredom. The first image was a mascara wand thing that I sometimes use for my eyebrows. I then realised I own ZERO eyebrow maintenance products. No pomades, liners, fillers- Nada. The second was a dollar blush I bought at Kmart for while I was at work and needed to touch up my makeup (back in the day when I was a very, very poor bartender). The blush was subtle and did its job, but it’s certainly not “good” by any standard. 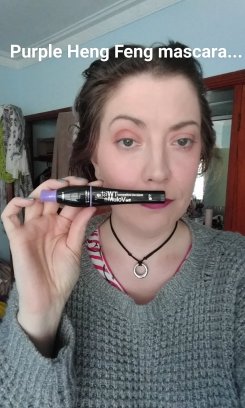 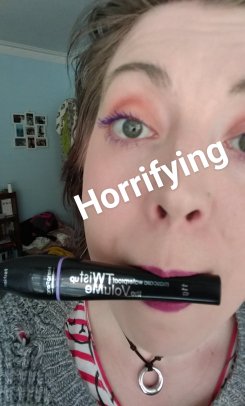 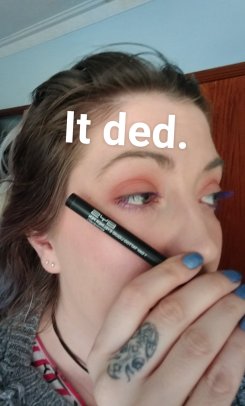 The final products I found in my Mary Poppins draw of WTF was a cheap-ass purple mascara that I had never opened. I went through a phase many, many years ago where I’d only wear coloured mascaras. This was not bought during that phase. I hated applying it and it didn’t do many wonders for my eyelashes, but I loved the colour that came out of it. It made my eyes look a lot more green and my housemate said I should keep it. I think I might. I tried a BYS eye tattoo liner that I’d never used and it was dead. It barely worked. It made me sad. 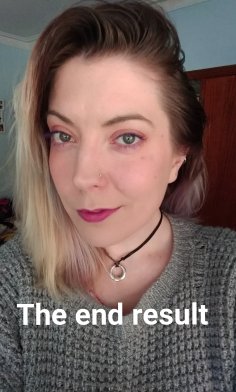 This is the end result. Which, compared to the first photo is probably a vast improvement. I felt a lot better having had some fun and having cleared out some space in my draw. It was an amusing and productive 45 minutes of rifling, laughing, coughing, and entertainment.

Hopefully you enjoyed this. Sorry the post was so long, but I had a lot of fun doing this and got pretty excited that I had something to share with you. If you want to see more stuff like this, let me know in the comments or email me. I know the internet is saturated with glamorous people doing tutorials, but this wasn’t meant to be that. This was just a sickly twit having some fun and sharing that process. I have a lot of makeup here including contouring, eye colour palettes, and a HUGE collection of lipsticks. So let me know if you want more of this, less of this, WHAT DO YOU WANT FROM ME!?

5 thoughts on “Bad Beauty Blogging (with photos of me)”