Getting critical feedback is a vital part of developing your craft as a writer/creative. I personally find it critical for other parts of my life too, but we’ll stick to writing for now. I was meant to post this about two weeks ago, but life got away from me and I had no idea how to phrase what I want to say. This post is partially story telling thanks to the interaction of two bloggers. It is partly advice on how to give and receive critical feedback. It’s mostly me just laughing at a great interaction and wanting to share it with those who missed it. I will be posting little guidelines regarding giving and receiving critical feedback as I write, and if I remember, I may even summarise at the end.

Combing through the WordPress Community Pool is a great way to find other blogs, engage in interesting dialogue, and learn more about your fellow bloggers. It can be a source of inspiration, communication and connection. The purpose of the Pool is to share your writings and garner feedback from your fellow bloggers. Some people will leave thoughtful comments that are simply appreciation, some will leave genuine feedback as assistance, and sometimes discourse like the following may take place**: 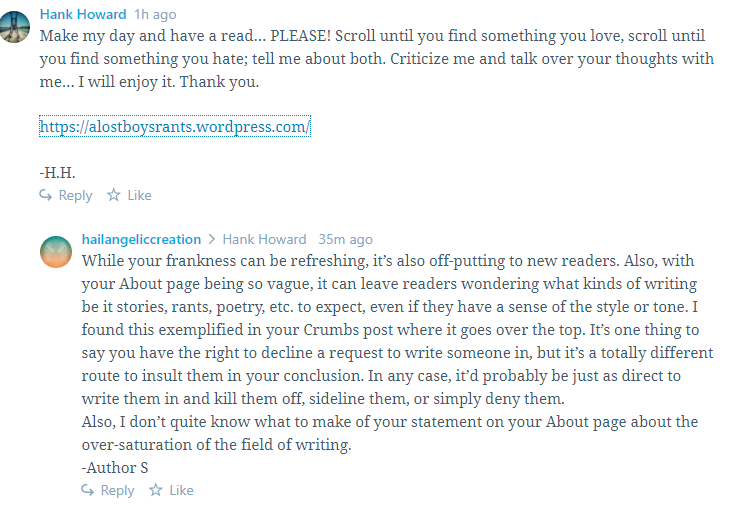 As you can see, Hank Howard requested feedback. Not only did he ask for feedback, he stated he wanted a conversation about his writing. This is a great way to get feedback, and of course generate discussion among your fellow writers. Hank’s statement makes it seem like he is not afraid to be told what is thought of his writing, he wants a discussion, and that’s a great attitude to have when it comes to improving your craft. This is probably rule/guideline number one: Be open to receiving feedback.

Author S left a lengthy, decent critical feedback message. It was insightful, personal, but the last statement was also kind of vague. I can’t speak for them on whether it was deliberate or just a passing thought, but I had a good chuckle at the irony of a vague statement about a vague post. Personally, I think some of the statements could have been made in to questions to garner a bit more information. While it is not necessary to ask questions when giving feedback, it can help generate more of a conversation rather than leaving the feedback as a one way street and can help you get more information. This is guideline two: When giving feedback, try to engage in reasoning and fact-finding or clarification.

I also want to add rule three: Try to find something positive to say. Even if you completely detested what you’re critiquing, if you don’t have anything nice to say, say nothing. Giving feedback should leave the person receiving it wanting to improve upon what they’re doing. Shutting them down and not offering any positives can have a big impact on a person. No matter how tough or use to feedback they are, writing (or anything creative for that matter) takes hard work. That fact alone should be respected, even if you don’t understand the work itself.

Anyway, my chuckle slowly faded in to confusion as I continued to scroll through the conversation:

Hanks forwardness confused me so I can’t imagine what Author S would have been feeling as they read that response. My problem with Hanks “thank you” is it is not a discussion. It’s not a conversation, just a “vague” and “ambiguous” semi-insult to decent, if slightly over the top feedback. As I stated before, Author S could potentially have phrased some of their statements as questions to encourage a conversation, and they definitely could have added a positive or two, but a lot of the feedback could still be commented on without the questions needing to be asked. Instead, when questioned about his response, Hank replied he didn’t care what other people thought.

Now, I respect that. I do; But not when you’ve just asked for thoughts on your work (and received said thoughts). When responding to critical feedback it’s worthwhile examining (however briefly) whether or not you’re actually wanting critical feedback, or if you’re willing to currently engage in a discussion there and then – because feedback is always going to happen, regardless of whether you ask for it or not. Rule four: Be prepared to listen, and accept the feedback.

This exchange between two writers left me laughing in bafflement and confusion. Both parties stayed true to their personality and their writing style throughout the whole exchange. Which was honestly incredible to witness. Having been born in to a creative family, giving and receiving critical feedback was one of the first life lessons I learned. Watching interactions like Hank and Author S’ was a humourous rollercoaster from start to finish. It followed half the “loose rules/guidelines” I was taught, and completely did away with the other half.

I highly recommend taking time to peruse the Community pool and even take a dive in the deep end and post something yourself. Get yourself drenched and start reading other people’s posts and leaving some feedback. It’s great practice and you’ll see it start to spill over in to your day-to-day life too. It forces you to pause and consider your words and how to correctly phrase them to get your message across. It also makes you more open to learning and evolving as a human.

So, to summarise a few of my guidelines for giving and receiving critical feedback:

1: Be open to receiving feedback.
2: When giving feedback, try to engage in reasoning and fact-finding or clarification.
3: Try to find something positive to say.
4: Be prepared to listen, and accept the feedback.

Over the years I’ve learned so many guidelines, but a lot of them cover nuance. A lot of websites will tell you there 10 or 50 steps to feedback, but honestly, 4 is a pretty good number. Hopefully you enjoyed the interaction as much as I did and hopefully you learned something. If you have a question or would just like to leave feedback, by all means, please do!

Until next time, stay silly!

** Hank and I had a pretty great email exchange when I emailed him requesting permission to use the screen shots of their public interaction. I’ve use these screenshots with full permission of both authors. Please click the links on their names and have a read of both their blogs. Who knows, you might find something you like; I sure did.

4 thoughts on “Dealing with critical feedback”